Starbucks got $2.3 Billion in Free Advertising from Game of Thrones mixup 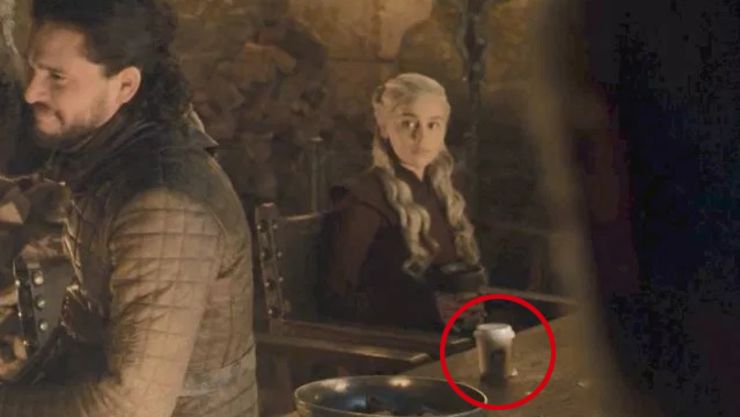 Starbucks gained an estimated $2.3 billion in free advertising over the last few days after a modern-day coffee cup was spotted during a “Game of Thrones” episode — and it turns out it wasn’t even a Starbucks cup.

On Sunday, eagle-eyed fans of HBO’s fantasy epic noticed something out of place during a feast scene. Photos and videos of the moment went viral on social media within hours of the show airing.

The label is muddled in shadow, but many fans speculated that it was the iconic green siren from Starbucks — and most of the jokes and discussion called out the Seattle coffee chain by name. Turns out, it was just a craft services cup.

Stacy Jones, CEO of marketing company Hollywood Branded, put the estimated value of all the buzz at $2.3 billion. Jones cited PR subscriptions service Critical Mention, which has tallied 10,627 mentions of Starbucks and ‘Game of Thrones’ online and on TV and radio around the world.

“This is a once-in-a-lifetime collision of opportunity for Starbucks,” she said. “But really, this is just the tip of the iceberg, because what isn’t being monitored or estimated is the word of mouth and social media on top of this.”

Separately, social media analytics and monitoring platform Talkwalker counted more than 193,000 mentions within 48 hours that cited both Starbucks and “Game of Thrones,” or a variation of the series’ hashtag, on Twitter, in social forums, blogs and news sites.

As of Tuesday, the coffee cup had been edited out of the episode, but chatter about Starbucks and the episode on Twitter and Reddit continued.

“It’s impossible to put a real figure on how much free advertising Starbucks gets out of the situation, but it’s in a totally different category than product placement because it was accidental, which makes it more valuable,” said Dan Hill, CEO of Hill Impact.

“I know people assign a value to these things, ‘more than $1 million in public relations,’ but I think it’s all hogwash — too hard to quantify. Plus this one will live on as a meme, so I guess you could say it’s a gift that will keep on giving,” he said.

The fact that so many people associated the cup with Starbucks is a testament to the strength of the coffee shop’s brand.

“Starbucks has become almost synonymous for coffee, so it is understandable that viewers assumed the cup on screen was one of theirs,” said Charell Star, director of content and innovation at marketing and advertising firm Essence.

Hill, however, said the viral nature of the event was less about Starbucks’ brand power and more about pointing out HBO’s mistake.

“The public response has more to do with the country’s ‘gotcha culture’ — picking people and brands apart — than it does the power of Starbucks,” he said.

The placement of the cup garnered so much attention because it was incongruous to the setting of “Game of Thrones,” said Noah Mallin, head of experience, content and sponsorship at media agency Wavemaker.

Traditionally, product placement would be more suited to a character or the show it was featured in. Had this been intentional, the cup would have been considered a standard product placement, a branded product that is in the scene but not part of the plot or storyline.

Because of the high ratings and cultural relevance of “Game of Thrones,” a product placement in this show could cost six figures, Mallin said. The May 5 episode drew 11.8 million viewers for its first airing, down about 2% from the prior week.

However, because HBO is not ad-supported, advertisers typically do not pay for product placement. Instead, they supply the product — a coffee cup, a car, an item of clothing or a shooting location — to the show, offsetting the cost of production rather than paying a flat fee for their product to appear.

Mallin said media or advertising companies would have a hard time ever reproducing this type of fervor organically.

“This was lightning in a bottle,” he said.